Meanwhile, back at the Ranch

Although the preps for TREASURE IN THE FLAME's self pub are in full swing, life has not stopped at the Dunne writing ranch. In the works is another YA manuscript-this time an urban fantasy set in contemporary PEI.

I loooooooove PEI. It's one of my favourite places in the world. Miles and miles of red sand beaches, lobster, rolling hills, lobster, friendly people...It's a wondeful place. (Did I mention lobster?)

I also love fantasy. When I read, I like to escape. I like to go somewhere that doesn't involve my day to day reality. But I also like real-lifeish fantasy. You know, stories that you know would never happen, but feel so real when your in them. White, mysterious unicorns instead of pink shiny unicorns farting rainbows. That sort of stuff. 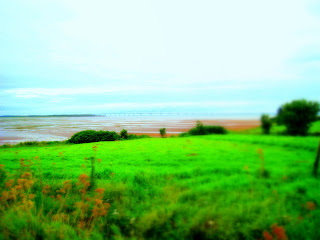 So when I was thinking about what I should write for NaNoWriMo last year, I tossed the idea around of a contemporary fantasy on PEI soil.

Thirty days later, I had 50k words of what was then titled Red Sand Selkie. I've spent the last 8 months or so editing and perfecting it and voila! My newest completed manuscript SKIN is born.

When Ocean O'Malley's family moves to the shores of PEI, she finds more than just beaches and a hot neighbour named Sam. Something is missing. Something she didn't even know existed. And only when she slips beneath the salty waves with Sam does she find out what that something is.

It's a fun story and it makes me want to go back to the Island and plunk myself down on a windswept red sand beach. Can't wait to see what happens next.

Posted by Overdunne at 9:49 AM