A few days ago I went to my first regular doctor's appointment (for myself not one of my kids) in
four years. As I sat in the waiting room afterwards, lab requisitions in hand, I got thinking about that fact. For me personally, this is not a big deal. The College of Family Practitioners recommends that a female of my age should have a periodic health exam every 3 years. And honestly, if I'm not sick, the LAST place I want to be is the doctor's office.

But what I realized as I sat there, was that (assuming everything is okay) it's quite likely that I will never see this doctor again. It took me almost two years after our posting date to find a doctor and get signed up with her practice, and if the lovely bloodwork comes back negative, I won't need to see her for another 3 years...at which point I'll be somewhere else. 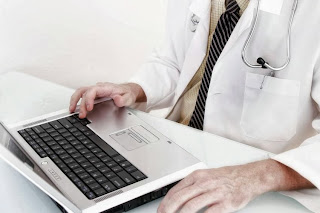 In my sixteen years of marriage and eight postings I've had four 'real' family doctors. Real, meaning a doctor that I might have developed some sort of relationship with. The other postings I dealt with group practices (where the doctor on-call was the doctor you saw), urgent care clinics, or I did without. I HATE finding a new family physician. HATE it. It is probably the single-most stressful part of the posting process for me. Well, beside finding good schools for the kids. On this posting I called at least SIX clinics in our current small home town, and every single clinic administrator but one was rude and unhelpful, acting like I was wasting their time. Then there's the transferring of records (and fees which are sometimes covered, sometimes not) and the 'get-to-know-you' visit (two hours out of an already busy schedule to fill out reams of paperwork). And God help you if you discover that you don't actually like the doctor you've signed up with, because you won't be given the opportunity to find another one.

I know I'm not alone, so I put it out to some other military spouses to see if they had similar experiences with finding a family physician.  Some of the comments I got back:

* "I was without a doctor until I was being treated at hospital for a serious back injury and one of the doctors agreed to take me as his patient...The lesson I have learned is to take control, research and act quickly."

* "It wasn't until I was pregnant in early 2011 (three years later) that I finally was able to get a doctor because I had to call around and be like "dude, I can't just go to a walk-in clinic to have a baby, SOMEONE has to take me" and I STILL had to make a lot of calls before someone would take me."

* "Currently on our 6th posting, and only one of those I couldn't find a doctor. We were only there 2 years thankfully."

* "In Petawawa I waited 1 year and in Cold Lake I got (a doctor) right away."

* "We are now posted to New Brunswick and have to go on a waiting list, which can be at least a year wait. You do not get to choose your doctor, you are assigned one. There are no mediclinics in the town, you have to go to the hospital, which closes I believe at 5 and then you have to go into Fredericton after that. It is a big worry not to have medical service readily available."

* "I am relatively new to the military life (3 years), but I haven't had a family doctor since we left home at the beginning of the 3 years."

* "We got posted to Saint-Jean-Sur-Richelieu Quebec, it will be 5 years next month and we have 3 kids and we still do not have a family doctor..."


Two years? Three Years? Five years of waiting for a family physician? And this is just a fraction of the responses I got. I know that it's not JUST military spouses dealing with the shortage of family physicians, but military families often move every two or three years. That means each move is a new fight, a new waiting list, a new wait time for provincial health cards and a new physician-patient relationship. And let's be honest, it is NOT FUN having a routine female health exam by a complete stranger. Some families seem to have better luck than others, with no wait times at all, but the vast majority of spouses who responded had long waits and very little choice in which practice they ended up with.

Another spouse brought up a different side of things--namely trying to get medical care in your own language. French speaking Canadians in English provinces (and visa versa) have great difficulty even communicating with their doctors. One spouse commented, "I have to take someone with me to translate the personal information that is discussed, and depending on the appointment or the seriousness of it, they would even have to come into the room with me for the tests." Military spouses do not get to choose where they live. But, like every Canadian, they should have the option to receive health care services in both/either of the two official languages.

Thankfully, the Canadian Forces are taking baby steps to make health care more accessible to military families and have opened several CF family medical clinics on bases like 14 Wing Greenwood to facilitate the process. Unfortunately some of these base clinics have been forced to close, due to lack of family practitioners to staff them.

Another step in the right direction, in Ontario provincially insured services now have the wait time waived for CF family members.

Better, but still a big problem.

An American friend of mine commented, "I'm American, a military spouse for 15 years now...never had an issue finding a doctor who would accept our family. We've moved 15 times or so. The only time we avoided the potential to not have a Dr. was when we did the exchange tour to Nova Scotia. We lucked out (or "in" as Canadians say!) and the same Dr. who was seeing the family we were to replace took us on as we were the same number of people in our family. I always felt guilty because I knew many of our neighbors (Canadian military families) who didn't have one."

Wow. She felt guilty for actually having a family physician? You know there is a problem when...

Anyway...as for me, my medical appointment last week was quick and relatively painless, and I left minus 3 vials of blood and with three extra specialist referrals in my hands. I was pretty lucky. I bought myself a treat, had a coffee and came home. Who knows where and when my next family physician visit will happen? Will I even see this doctor again? Or will it be the same, tedious search for a new doctor in a different town? Province? Country?

I have no idea.

What about you? Have you ever had to find a new physician as a result of a move?

Brenda
Posted by Overdunne at 7:29 AM