Today's cover reveal is a historical fiction written by the fabulous LK Hill.

CITADELS OF FIRE is described as follows:

In a world where power is paid for in blood, no one ever aspires to more than what they were born to, and danger hides in plain sight, Inga, a maid in the imperial Russian palace, must find the courage to break the oppressive chains she’s been bound with since birth.


Inga’s life in sixteenth century Russia is bleak until a man she crossed paths with as a child returns to the Kremlin. Taras is convinced his mother’s death when he was a boy was no mere accident and has returned to try and discover what really happened, all during the reign of Ivan the Terrible, the most brutal and notorious ruler ever to sit the throne of Russia. While Taras finds only lies and silence where he seeks truth, Inga struggles with the feelings of oppression that have plagued her for most of her life. Taras gives her the chance to leave her loneliness behind forever, but the cost and future of such a liaison is uncertain and Inga is afraid.


Up against the social confines of the time, the shadowy conspiracies that cloak their history, and the sexual politics of the Russian imperial court, Inga and Taras must discover their past, plan for their future, and survive the brutality that permeates life within the four walls that tower over them all, or they may end up like so many citizens of ancient Russia: nothing but flesh and bone mortar for the stones of the Kremlin wall.

So with out further ado... 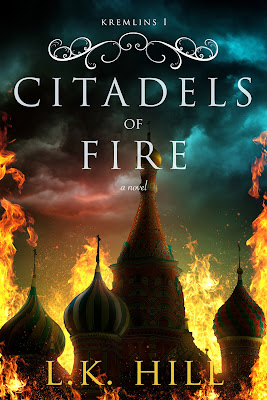 Beautiful! Love the flames and the ominous sky. What do you think?
You can find more about LK Hill and her book on her blogs...
lkhill.blogspot.com
musingsonfantasia.blogspot.com
...or on the Jolly Fish Press website!
Tune in on the 9th to see the next cover reveal...for CONFESSIONS OF THE VERY FIRST ZOMBIE SLAYER (THAT I KNOW OF)  by F.J.R. Titchenell!
Brenda
Posted by Overdunne at 7:30 AM