Yesterday Rebekah Purdy (my agent mate) and Entangled Teen revealed the covers for LEGEND OF ME, releasing in early 2014, and THE WINTER PEOPLE, releasing July 1, 2014! I'm a day late to the party, but glad to be helping out. Check out the gorgeous covers, exclusive excerpts, and scroll down to the very bottom to enter to win an eARC of each!

On to the reveals! 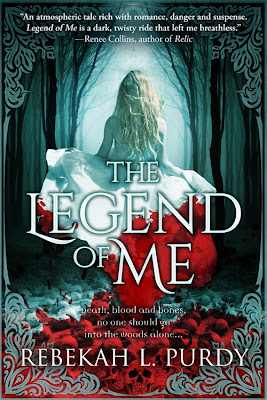 
Sixteen-year-old Brielle has grown up hearing tales of a beast that kills humans, leaving behind only a scattering of bones and limbs. Or so the village elders say. She thinks it’s just their way of keeping children in line, though it doesn’t explain her grisly premonitions of blood, claws, and severed heads.
When Lord Kenrick, Knight of the Crowhurst Order, shows up asking questions about the legendary monster and Brielle finds a mangled body in the woods, she begins to wonder if the grim stories are true. Her attraction to the handsome knight grows as she spends time with him searching for clues to the creature’s existence, and she becomes even more determined to help him discover the beast’s location.

But as her seventeenth birthday approaches, her nightmares worsen. If Brielle doesn’t figure out the connection between Kenrick, the monster, and visions of a ghostly woman in the woods soon, more people could die. Including those closest to her…


Brambles scratched my legs, snagging my skirt. Gnarled trees bent in gruesome forms, while thick shadows splayed out beneath them. A heavy gloom settled over the woodland as wisps of fog slithered like snakes against the ground. I shivered.


Don’t think. I picked an animal trail to follow, stepping over dead branches and forest debris. Blood pounded in my ears and the hair on the back of my neck prickled. I twisted around to glance behind me.


Nothing there. Only the trees. Urgency gripped hold of me and I picked up my pace once more. As I scrambled through the thicket, an overwhelming scent of rotten meat made me gag. I covered my mouth with my hand and stopped running when a bright red piece of fabric caught my eye. With hesitant steps, I moved toward it.


“Oh God.” I stumbled. There, sticking out from beneath a barberry bush was a severed arm, its finger pointed at me in accusation. My breath came in gasps as I scanned the rest of the clearing.


My foot nudged against something and I looked down in horror to find the head of Liam Gatekeeper staring up at me.


I screamed, backing away as fast as I could. All around me were pieces of his body scattered like breadcrumbs. I shielded my eyes with my hands, until I bumped into something else.


With another scream, I whipped around only to find myself faced with an oak tree covered in dried blood and deep claw marks. My vision darkened and I prayed I wouldn’t faint, that I wouldn’t be stuck in the woods. Because somewhere out here, a monster lurked. If I didn’t believe it before, I did now. The beast was real. 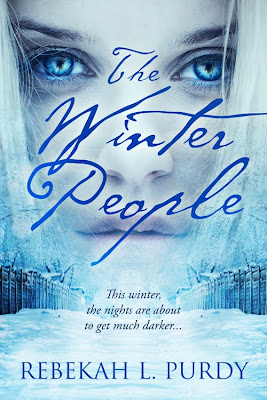 An engrossing, complex, romantic fantasy perfect for fans of Kristin Cashore or Maggie Stiefvater, set in a wholly unique world.


Salome Montgomery fears winter—the cold, the snow, the ice, but most of all, the frozen pond she fell through as a child. Haunted by the voices and images of the strange beings that pulled her to safety, she hasn’t forgotten their warning to "stay away." For eleven years, she has avoided the winter woods, the pond, and the darkness that lurks nearby. But when failing health takes her grandparents to Arizona, she is left in charge of maintaining their estate. This includes the "special gifts" that must be left at the back of the property.
Salome discovers she’s a key player in a world she’s tried for years to avoid. At the center of this world is the strange and beautiful Nevin, who she finds trespassing on her family’s property. Cursed with dark secrets and knowledge of the creatures in the woods, his interactions with Salome take her life in a new direction. A direction where she’ll have to decide between her longtime crush Colton, who could cure her fear of winter. Or Nevin who, along with an appointed bodyguard, Gareth, protects her from the darkness that swirls in the snowy backdrop. An evil that, given the chance, will kill her.


The sky darkened with ominous storm clouds. Giant flakes fell onto my face, sticking to my eyelashes and cheeks. Snow blew unhindered across the yard into what looked like small tornadoes.
Oh God. It’s happening again. The frigid air. The creaking of the treetops beneath the wind. Even the way the snow blew across the yard.


I only had one more feeder. Just needed to toss the seeds in then I could leave. Be safe.


The pond water rippled, while the trees bent beneath the strong gusts. Soon, everything became so white I couldn’t see the house. In the distance a strange tinkling sounded, like dozens of wind chimes.
What had the shrink told me to do?
Ten, nine, eight. Breathe. Seven, six, five. Shit!


Panic stole my thoughts. I backed away from the pond as the flurries swirled toward me. Chasing me.


Then, I bumped into something—something that felt quite human. A firm chest, arms, hands. Not something, someone. A shriek tumbled from my lips and I spun around to face my captor.


“It’s okay. I won’t hurt you,” a soft masculine voice said, pale hands clinging to my arms as he kept me from falling.


My gaze followed those long fingers, up black leather sleeves, to the most gorgeous face I’d ever seen. My breath caught in my throat. I’m gawking. But I couldn’t help it. His raven hair shot with strands of blue, his face pale and perfect, like an ice sculptor had chiseled it into existence. His eyes—oh God, his eyes. They were the palest blue I’d ever seen. Glacial. He had to be over six feet tall, muscles evident through the tight shirt he wore beneath an unzipped jacket.


His mouth turned up at the corners as if enjoying my scrutiny. A cocky grin that made my cheeks warm.


“You’re trespassing.” I tried to keep the tremble from my voice. “This is private property, or can’t you read the signs?” Bravo, that’s right, scare him off with your bitchiness.


He chuckled. And it sounded like the low song of the chimes. “Doris doesn’t mind me coming around. In fact, I’ve met you before, Salome.”


My name on his lips made my knees go buttery. I groaned inwardly.


“You know my grandma?” I fidgeted with the bucket still in hand.


He gave a nod. “Yeah, I’ve known her for years. But I haven’t seen you since you were a child.”


Warning bells went off in my mind, but I pushed them aside. If he knew my grandma, then he must be okay. “Funny, I don’t remember you at all.”


“Don’t you, Salome?” Strands of my hair blew about my face. He reached a hand out as if to touch them then stopped, dropping his arms back to his side.


“No. Grandma’s never mentioned you.”


He gave me another cocky grin. “Well then, maybe we should be reacquainted.”


“Or maybe not.” I snorted. “I’m not sure how you got on the property, Grandma keeps all the gates locked.”


He produced an antique-looking skeleton key. “She gave me this. Like I said, Doris has known me for a long time.”


“I’m sorry. I’m not trying to be a jerk or anything, it’s just my grandma never mentioned I’d have visitors.” In fact, I wondered why she didn’t ask this guy to watch her house instead of me.


The arrogance left his face and he stared at me. “Perhaps, we can try this again.” He held his hand out to me. “I’m Nevin.” 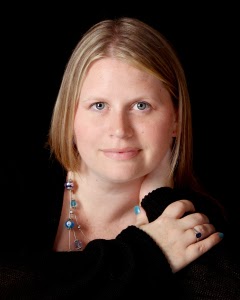 
Rebekah was born and raised in Michigan (just look for the mitten-shaped state on the map). She’s lived there most of her life other than the few years she spent in the U.S. Army.  At which time she got a chance to experience MO, KS, SC, and CA.


She works full time for the court system and in her free time she writes YA stories. Pretty much any genre within the YA realm is game for her, but her favorites are fantasy, urban fantasy, paranormal romance, thrillers, light sci-fi, and some time travel.


She also has a big family–she like to considers them the modern day Brady Bunch. When her hubby and her met and got married, he had 3 children from a previous marriage, she had 2 and  have 1 together. It’s a lot of fun though.


And she can’t forget her other family members–yep, they’ve got some pets: 4 dogs, 3 cats,  and 1 turtle. Everyone in the family has one…she won’t bore you all with their names (unless you really want to know). Okay, you talked her into it! Jack, Pearl, Grr…(yes that’s her dog’s name), Callie, Shadow, Mooshoo, Grouchy, and Sorbert. Other than writing some of her other hobbies include: reading (mostly YA of course), singing, swimming, football, soccer, running, camping, sledding, church, hanging with her kids, and traveling.


She belong to a fabulous writing group called YA Fiction Fantatics (YAFF) and you guessed it they all write YA!


REPPED by Jennifer Mishler and Frances Black of Literary Counsel.


And that’s her in a big ‘ol nutshell.


1 eARC of LEGEND OF ME International


1 eARC of THE WINTER PEOPLE International


Rafflecopter Link:
GO HERE TO PARTICIPATE:
http://www.rafflecopter.com/rafl/share-code/ZTIzODliYTI4ZTEzMGVjODBhNzA2MmFmMTU3YWM3OjEyNQ==/
Posted by Overdunne at 6:30 AM