Life on the Salish Sea

For those of you who may have missed it, about two years ago I wrote a young adult fiction manuscript about a silkie, a mythical creature who supposedly sheds her skin and drags her victims below the waves to the unknown. My story has a few twists on the classic mythology with Sam the mysterious teenage boy down the beach, but it still revolves around seals and the ocean. The manuscript, entitled SKIN, is with my wonderful agents at Literary Counsel, and I am working (slowly...) on a sequel.

You also may or may not know that last year we moved from central Canada to the Pacific Coast to Vancouver Island, right on the body of water known as the Salish Sea. On the very first day we arrived, we saw a harbour seal outside of our hotel. The next day we saw two. And now pretty much every time we go by the water, at least one little dark-eyed head pops up to say hello. They are so thoughtful and inquisitive, but still shy enough to give you just a look or two before they move on. They look kind of like golden retrievers, but with big, sharp claws. I love them, and I'm constantly reminded of SKIN when I see them.

Yesterday my family and I were sailing. Before we went out we saw a fat seal, who popped up on the wharf and hung out for a bit. We called him Dave. We took the boat, went out for a few hours, and were followed by porpoises and a few other seals. It was a wonderful day of fresh air and family time.

When we came back Dave appeared to have a very affectionate friend, whom we called Davette. We giggled a bit at how close they were. Dave (or Davette?) truly appeared to be climbing on top of the other's back. Yeah. My thoughts went there too.

The kids popped up to the car, and I ran back to the boat to do something just before we left. I heard a splash and looked around, and there was this little face checking me out, not two feet away. 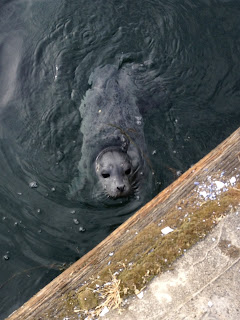 I thought it was Davette, but on a second look, Davette was REALLY small. Then Davette flipped over and I saw something unexpected...an umbilical cord still attached! Davette was a Baby Davie! Just out! Brand new! Then momma popped up and Davie wanted to play and snuggle. This was all literally right at my feet.

I even got some (very poor quality) video:

Of course there was no one around to share this amazing sight with...but my handy dandy iPhone had to suffice.

Perhaps it's time to get back to that sequel? Hmmm...Could Sam have a little brother?

So much to write about...so little time.

Posted by Overdunne at 1:22 PM