It's DEPENDENT's anniversary! Exactly one year ago today, I was holding my breath as DEPENDENT went out into the big, big world to find it's fate.

Wow, have I learned a lot.

Has it been an easy year? No.

Has it been a good year? Definitely.

I get a lot of questions that start with 'how', when talking to new authors. How do I finish? How do I find an agent? How do I get my work published? I'll admit, it's not an easy world to work in. So for those wonderful people who have come to me with their questions, who've asked for advice, and who've given me good, honest criticism, I thought today I'd share with you a few of my lessons learned. I don't think I'll ever consider myself an expert. But I've got more experience than some...so here goes.

Lesson #1:  The publishing world is unpredictable.

I wish I could find a crystal ball to tell me how a book idea is going to fare. What topic is going to work and what is not. How many people are going to show up at a book signing. Who is going to want my book. What a contract is going to look like.

But there is no crystal ball. I can't tell anyone what will work, because what is cool today may not be cool when you finish your final draft. The odds of writing a book that turns into a phenomenon are pretty slim.

Write what you love to write.

Lesson #2: A book launch is for you, your friends, and your family.


Unless you've got the support of a huge publicity team and gazillions of dollars, plan your book launch so that your friends can come. DEPENDENT was launched in a big city, in a huge store...just after my family and I moved across the continent in an epic military move. We had to pick a launch date long before the military plans solidified, and it just worked out that it was after the move took place. As it was my second launch (TREASURE IN THE FLAME launched in 2012), I thought I'd roll with things and see how it turned out.

Although DEPENDENT's launch was a success, it could have been so much more. I really, truly missed the support of my close friends and family. I hope to plan my next launch (when it happens) either later on in our next military post (when we've made some friends), or closer to my home base.

It's so much easier to publicize something when you have the advantage of local word-of-mouth. And your success is the success of those you love. Plan your launch so they can be there.

Lesson #3: Publicity is so important.

If people don't know about the book, they won't buy it. I've been very, very fortunate to have a great team, but I couldn't have had the success I've had without my #1 PR GUY...my hubby. He's had my back since day one, which was INCREDIBLY important with this book. If you've read DEPENDENT you know why.

Lesson #4: Always be prepared to do a radio interview.

One of the disadvantages to having a switched-on #1 PR GUY is the random radio interview...the one that happens while your driving, unprepared, home from the grocery store. Thank heavens for wide shoulders on Ontario back roads--lots of room to pull off and try to collect your thoughts. And thank heavens they can't see what you're wearing on radio.

Lesson #5: Not everyone will love you.

This one I was prepared for. I knew that DEPENDENT would not be the book for everyone. And I was right. But writing a book that people feel strongly about--either positively or negatively--is a good thing.

Engaging with haters never ends well. Thankfully I knew this before I started. Sure, I love a good debate, but I'll let the people who read my work stick up for me. Trolls generally are looking to stir the pot, whatever the cost. And the more you engage with them, the more vindictive they get. Don't even justify them with a response. At all. I talked about it a little bit in 15 Seconds, this past May.

The writing world is FULL of disappointment. Rejection is part of the package. Agents, editors, readers...there are lots of 'NO's' in this career. And there are many, many moments over the past few years where I've considered dropping it all.

I have three really cool manuscripts finished and ready to go. I've got a couple more on the way. And I'm most certainly not done with this adventure. 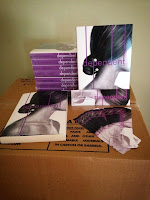 Thanks for sharing the journey with me.

Check out Posting Phase Eight to remember the insanity around DEPENDENT's launch.

Or try Launch Week Recap to hear about my first launch!

Comment below and I'll enter your name into a draw for a signed copy of DEPENDENT, A NOVEL! Draw will take place Wednesday August 5th!