Mom in the Middle Movies: Harry Potter and the Half-Blood Prince. 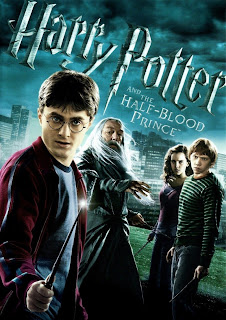 It's been abnormally hot in my neck of the woods for the past week, and we don't have air conditioning. I'm anti-air conditioning, mainly because it just seems wrong to be freezing inside when it's so hot outside. I like my windows open. I like to hear the birds and feel a breeze. Besides, temperatures in the early 40's Celcius (100's Fahrenheit) are only seen a few weeks of the year here. When those weeks hit, we close the windows (and the curtains) and hide in our finished basement where it stays comfortable.

Anyway, my kids have decided that this week is Harry Potter Movie Marathon Week. If it's too stinkin' hot to be outside, why not snuggle in with a heat-avoiding cat and some popcorn in front of the big screen? GREAT idea. True fans of the series, they even decorated and were drinking some of their own liquid luck in fancy goblets.

Yesterday's feature was Harry Potter and the Half-Blood Prince, one of my favorites in the HP saga. Harry and friends are growing up. Learning about love. They're in that phase where the know everything and nothing, are daring and funny and ready to save the world. We also get to meet Tom Riddle as a boy, who he was and how he became the most dangerous wizard in the world.

One of my favorite scenes is when Ron 'accidentally' eats love-potion-laced chocolates intended for Harry. Ron, normally moody and avoiding all forms of affection, turns into a love-struck fool, spewing affection for a girl he's never actually talked to. (view a clip here) It's hilarious to watch, and you can just tell how much fun Rupert Grint (Ron) and Daniel Radcliffe (Harry) were having as they filmed it. Of course, two seconds later Ron is lying on the floor, poisoned and foaming on the mouth, but that's the brilliance of the story. Humor just where it's needed.

The story doesn't end of course, and the sadness that follows is only a glimpse of what's to come. At least Harry has his BFF's, and they're ready to fight.

Other highlights? Helena Bonham Carter as Bellatrix Lestrange delivers a top notch performance. And seriously, Alan Rickman as Snape. He is beyond amazing. His facial expressions, the way he e-nun....ciates his words... LOVE.

Downside of the movie? At 153 minutes, this movie is LONG. If by some weird chance you haven't seen it yet, plan a bathroom break. Or two. The length also makes the ending feel a bit rushed, but this could be the result of the cliff-hanging nature of the story. Lots of action and boom, The End.

All in all #6 is one of my favorite HP movies. Probably not the best, but close. I give it two big thumbs up.

How about you? Have you seen all of the HP saga? What's your favorite? Least favorite?