Book Review: Here Without You by Tammara Webber

I bought my first Tammara Webber book about two years ago, based on a best-seller/inexpensive e-book recommendation on my Kindle.  It sounded fun, light, and cheap so I paid the three or four dollars and downloaded BETWEEN THE LINES. 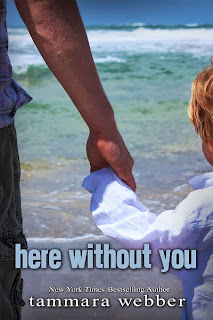 I finished it in a day.

I downloaded the second book, WHERE YOU ARE. I devoured it. Then I waited...not very patiently I might add...for book three: GOOD FOR YOU. Same thing.

So when book four, HERE WITHOUT YOU, released I couldn't even wait to dig my Kindle out of the back seat of my car...which my husband had taken with him on a business trip. I downloaded it on my iPhone. Twenty four hours later, I'm writing this blog. For no other reason than I can't contain my gushing praise for a great book.

The Synopsis (From Ms. Webber's blog):

Everyone has secrets.
Some are buried so deep, their existence is forgotten.
But a secret never told can turn into a lie.
And in love, a lie is one thing:
Poison.


Reid is in love with Dori, though she hasn't told her parents she's fallen hard for the guy they'd forbidden her to see. Now she's leaving for college, and Reid's promise not to push her to go public is wearing thin, especially when she can't - or won't - return those three important words he wants to hear.

Five years ago, Brooke and Reid were a Thing. That relationship is long gone, detonated amid allegations of cheating - but they still share a secret that would stun everyone they know and alter public perception of them both if it ever comes out. And it's about to do just that.


The BETWEEN THE LINES series is a New Adult series that follows Hollywood starlets as they discover love and learn that life can't be scripted. Emma, Reid, Brooke, Dori, and Graham have to deal with some serious issues, always underscored by the paparazzi's take on things. Lies get magnified and truths get altered by one picture, one rumor or one misunderstood gesture. In Reid and Dori's case, his past destructive behavior and his present celebrity status become a deterrent to her feelings for him. And the secrets they both hold could completely destroy the one good thing that's happened to either of them in a long time.

As a writer, I've found that I read more and more for pure enjoyment. If something doesn't catch me, doesn't entertain me, I don't want to read it. I'm not looking for deep literary tomes. I'm looking to fall in love with characters and live their problems with them. I'm looking for small truths revealed amidst real-to-life dialogue and story telling. Regardless of age range or genre. And if you're looking for something similar, this series is for you. Tammara Webber is...I don't have enough superlatives to put into words her amazingness. Or what a fabulous job she does at bringing characters to life. I want to shake Dori. I want to swoon over Reid. I want to hug River. I want you to READ THIS BOOK. It's just that good.  Two HUGE thumbs up.

Only down side? The 'fourth, final installment' part. Nooooooooooooo! Say it isn't so! I want more.


Brenda
Posted by Overdunne at 5:41 PM