Another peek today at the creative genius that is the Jolly Fish Press design team! And always game to help out a fellow author. Today's feature is Little Dead Riding Hood, the second instalment in mother-daughter team Amie and Bethanie Borst's Scarily Ever Laughter middle grade series. The first book, Cinderskella, was released in the fall.

A hint about the book:

Unlike most kids, Scarlet Small’s problems go far beyond just trying to fit in. She would settle for a normal life, but being twelve years old for an entire century is a real pain in the neck. Plus, her appetite for security guards, house pets and bloody toms (tomato juice) is out of control. So in order to keep their vampire-secret, her parents, Mort and Drac, resort to moving for the hundredth time, despite Scarlet being dead-set against it. Things couldn’t be worse at her new school, either. Not only does she have a strange skeleton-girl as a classmate, but a smelly werewolf is intent on revealing her secret. When she meets Granny—who fills her with cookies, goodies, and treats, and seems to understand her more than anyone—she’s sure things will be different. But with a fork-stabbing incident, a cherry pie massacre, and a town full of crazy people, Scarlet’s O-positive she’ll never live to see another undead day.

Not even her Vampire Rule Book can save her from the mess she’s in. Why can’t she ever just follow the rules? 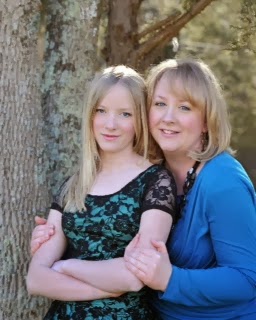 Amie Borst is a PAL member of SCBWI. She believes in Unicorns, uses glitter whenever the opportunity arises, accessories in pink and eats too much chocolate.

Yes, Jolly Fish Folk are generous. Another chance to win! To celebrate the cover for Little Dead Riding Hood, Amie is giving away a $25 Amazon gift card! Just hop on over to her blog HERE and fill out the Rafflecopter form at the bottom. Good Luck!

And now for the reveal! 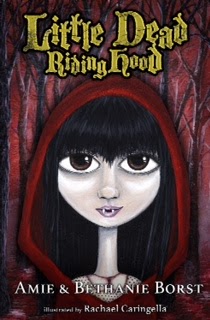 Want to know more?  You can find Amie and Bethanie on the interwebs here:

*You can find Amie on Twitter (www.twitter.com/AmieBorst)
*Pinterest (www.pinterest.com/AmieBorst)
*From the Mixed-Up Files of Middle-Grade Authors (www.fromthemixedupfiles.com)
*Blog (www.amieborst.com).
*Together they can be found on Facebook (www.facebook.com/AmieAndBethanieBorst).

Posted by Overdunne at 8:09 AM